The report "Termite Control Market by Species Type (Subterranean, Dry Wood, Dampwood), Control Method (Chemical, Physical & Mechanical, Biological), Application (Commercial & Industrial, Residential, Agriculture & Livestock Farms), and Region - Global Forecast to 2022", The termite control market was valued at USD 2.96 Billion in 2016. It is projected to grow at a CAGR of 5.6% from 2017, to reach USD 4.11 Billion by 2022.

The years considered for the study are as follows: 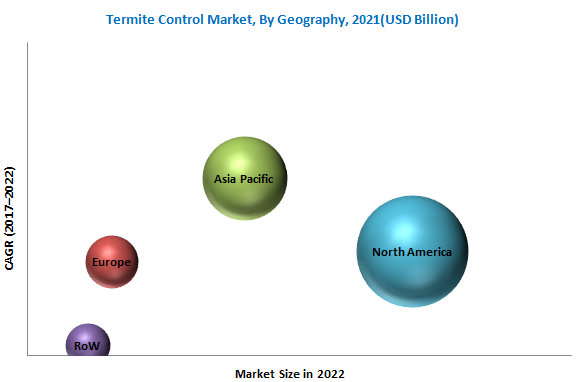 The objectives of the report:

The climatic conditions in North America and Asia-Pacific are suitable for the breeding of termites; the market growth in such regions is expected to be primarily driven by urbanization, public hygiene measures, and supportive government initiatives. Hence, termite control will be viewed as a business opportunity in the next five years. As a result, many multinational players have entered into the production of various control methods of termites.

Chemical methods are highly used to control termites. Chemical termiticides are synthetic substances used to kill termites, either by contact or by systemic action. Chemicals used in the termiticides are mixed with water, and are hence easily applicable on the affected area. The ease in application has made this control method more convenient to use by termite control solution providers. The chemical control methods accounted largest market share in 2016. Due to stringent regulations pertaining to the usage of chemical compounds, the European market is projected to witness a slow growth. Chemical control methods include chemicals of various classes such as organophosphates, synthetic pyrethroids, phenylpyrazole, chlorinated hydrocarbons, chloronicotinyls, and others such as trifluoromethyl aminohydrazones, borates, pyrroles, and fluoroaliphatics.

The application of termite control in the residential segment is projected to grow at the highest CAGR from 2017 to 2022. The increase in population density, climate change, and growth in awareness among public households for termite control are the driving factors in developed markets such as North America and Asia-Pacific.

North America accounted for the largest market share in 2016, due to significant demand for termite control services in commercial establishments (such as manufacturing units, hotels, and restaurants) and industries (such as food processing and pharmaceutical sectors) in the region. The housing market in North America has been witnessing growth. Further, the growth in awareness and rise in concerns about the damages caused by termites have resulted in increased demand for termite control services in this region, as most of the constructions are generally based on wood.

Our 850 fulltime analyst and SMEs at MarketsandMarkets™ are tracking global high growth markets following the "Growth Engagement Model – GEM". The GEM aims at proactive collaboration with the clients to identify new opportunities, identify most important customers, write "Attack, avoid and defend" strategies, identify sources of incremental revenues for both the company and its competitors. MarketsandMarkets™ now coming up with 1,500 MicroQuadrants (Positioning top players across leaders, emerging companies, innovators, strategic players) annually in high growth emerging segments. MarketsandMarkets™ is determined to benefit more than 10,000 companies this year for their revenue planning and help them take their innovations/disruptions early to the market by providing them research ahead of the curve.